Before we started developing this project we looked online for research and/or papers that have done something similar to what we were planning on doing. We found two researches, one by Giusti et al1. and one by Smolyanskiy et al.2 Giusti classified their images with 1 of 3 classes: left view, right view and center view. They trained their model to classify an image with one of these classes to then get steering from this prediction.

Smolyanskiy did the same things but instead of 3 classes, they used 6 classes. The 3 same classes as Giusti and 3 classes that represented if the drone was in the center, left or right of the path. The addition of these 3 classes was done to make sure that the drone always flies in the middle of the path and so to avoid obstacles to the side of the road.

You can keep adding classes to make a better steering estimation but this is not the best way to do this. We came with the idea to use image segmentation to create an exact mask of where the road is on the camera’s field of view. This way it is possible to make more accurate steering estimations and it even gives us the possibility to implement a system that is able to take turns.

Semantic segmentation is like object detection a computer vision technique. With object detection you are trying to detect a certain object in an image and most of the time draw a box around it. Semantic segmentation kind of does the same but it tries to label a region in an image. In our case, we are only interested where the road is, so we only need to mark the road and no other regions.

See Dataprep > Datasets for an overview of the datasets we used.

To train a machine learning model you need lots and lots of ground truth data. Sometimes it is easy to collect the data and more data often means better results from your model. But in our case collecting and annotating the data is very labour intensive. Luckily there is a technique called data augmentations that takes a piece of data, in our case an image and the mask, and does some augmentations to it to create new data. Some examples of augmentations you can perform on images are: horizontal flip, crop, hue, color, etc.

We first wanted to use a library called ‘Albumentations’. This library has an easy to use API to perform augmentations on images and it had way better performance then the built-in Tensorflow augmentations. Unfortunately we were not able to use this library because it is not possible to run arbitrary Python code on a TPU. The TPUs only accept Tensorflow commands.

We chose to implement our model in Tensorflow, a machine learning library created by Google. The reason we chose Tensorflow is because it gave us the possibility to use a Keras model via the Tensorflow Keras API. This enabled us to use Google TPUs to train our model. Tensorflow also has a very active community and extensive documentation.

The network structure that we chose is called Unet4. This network is created by the university of Freiburg and it was originally created to segment clinical images like X-rays. Unet is a so called ‘Convolutional neural network’. The reason why we chose for this model is because it gave us the perfect balance between performance and accuracy. It is also a model that does not require a very large dataset to get good results from.

If we talk about a network structure, we don’t mean a network with routers and switches but a network of operations that happen on a image and that are connected to each other. We are not going in full detail about every layer in this network but there are two main ones: Convolution layer and Max Pooling.

We used a high level API called Segmentation_models5 to create our model. This library abstracts away some things and makes it easier to implement a model. This library returns a Keras model but since we were planning on using Google’s TPU’s to train our model, we had to use the Tensorflow Keras API.

As the backbone for our network we used efficientnetb36. This is the encoder used to extract features from the data. It might be a bit confusing but we are not actually using the standard Unet but we are implementing efficientnet in the Unet structure. If you look at the image below, you can see that there are two parts to the Unet: Downsample and upsample. The downsample part is the efficientnet and the upsamle part is efficientnet but reversed. You can substitute efficientnet for other backbones like Mobilenet which is optimized to run on mobile devices. 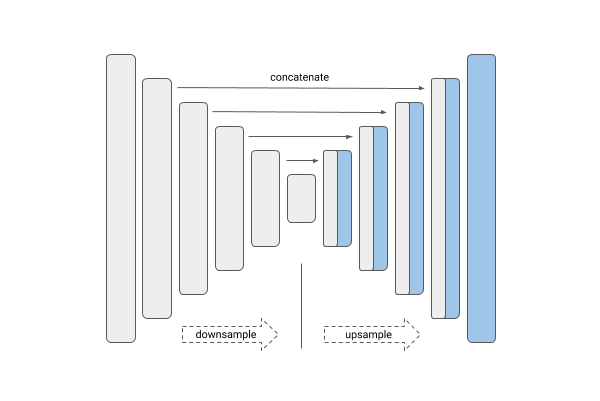 The loss function we used was a custom loss function that was also implemented in the Segmentation models library. Essentially it is two loss functions, dice loss and Focal Binary Loss, added together.

All datasets were split into three subsets, train, test and validation. The splits we used were: 70% training, 15% test and 15% validation. An image can never be in 2 splits at the same time.

We did all our training without augmentations in this Jupyter Notebook

All training with augmentations was done here

When you train your model to the point that it is getting too specific and it does not generalize anymore, your validation loss will start to rise again. This is because the model is so ‘used’ to the training data that when you use other data, it does not perform that well anymore. To prevent this from happening and to decrease training times, we implemented early stopping. Essentially what early stopping does is that when your validation loss starts to rise again, it will stop training and save the best model. We used a ‘patience’ of 3, this means that when your model does not improve for 3 consecutive epochs, it will stop the training. You can let the early stopping monitor all metrics, we chose to monitor validation loss since it is the most accurate metric. 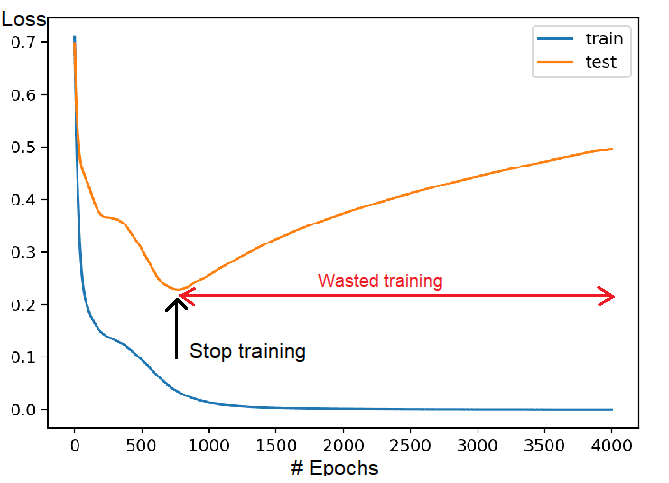 When training on Freiburg + augmentations we didn’t see a big improvement since the dataset on itself was large and varied enough.

Training on Giusti was an exciting one for us since we didn’t know if the masks we got from our crowdsourced project were sufficient to train a model. After training and tweaking some parameters we did not have a very good result. This is probably due to the fact that the Giusti dataset is too varied and that there was too much noisy data. When testing the model on it’s own validation set it didn’t give good results at all, most of the masks were off or there were no masks at all. Also the testing on Freiburg and Steentjes didn’t give good results at all.

Adding augmentations to the training didn’t help either, it gave pretty much the same result as the model without augmentations.

We also added some augmentations to this dataset and here you can see a big difference. Thanks to the extra augmentations the validation loss dropped. For our drone we don’t really need all the detail in the mask, if it can see the direction the path is going in, it should be fine. But if you want to do other things with the mask, you need a better defined path, not just the rough direction.

We also tried to concatenate some datasets together to see if this gives any good or interesting results. The concatenation of Giusti, Freiburg and Steentjes was ok in seeing the path but it sometimes lacked detail in more difficult images.

Since this dataset was pretty big it didn’t really get any benefits from doing augmentations.

Finally we tried a concatenation of Freiburg and Steentjes. The first time we ran this training, it kept improving until all the 40 epochs were finished and the training stopped. We upped the number of epochs so it could train for more than 40 epochs and in the second run it still improved and it ended at 0.24 validation loss. When looking at the output from the test data We saw some pretty good results, paths were well defined, also horizontal paths that don’t start at the bottom of the image.

Like with all tests, we also tested if augmentations would help and in this case it made a good model better. After training this model with the augmentations we saw very good results. Most predictions were well detailed and even very difficult trails were segmented correctly. Paths to the side of the road were also detected by the model, this can be especially useful for further development of the software to let the drone take turns. Also the model almost always classifies non roads as non roads so that our drone does not start moving in the wrong direction.

Without this TPU we wouldn’t have been able to do so much experimenting with training our model on different datasets etc. because it would have taken day’s to train our model on our own laptop. 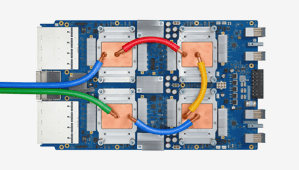 TensorRT is an SDK made by Nvidia for doing inference on a deep learning model that is optimized for Nvidia GPUs. By converting your model from a Tensorflow Keras model to a TensorRT model, you first have to freeze the model. Freezing a model is essentially locking all the weights in the model so that your model stays the same. Then you can convert your model to TensorRT.

The reason why we wanted to convert our model to TensorRT is that we were planning on running the inference on a Nvidia Jetson Nano 4GB. This way we could get a performance boost for the inference. The Jetson nano is a mini computer that has a 128-core Maxwell GPU. Unfortunately we were not able to make the conversion work.

When testing our final Freiburg+Steentjes+augmentations model in a real forest we had very good results. Our drone always stayed on the path and followed it nicely. The model also performed well on densely overgrown paths and was able to guide our drone over this path. When pointing the drone in a direction where there is no path, the model returns a black image, indicating that it is well trained to not classify non-paths as paths. The model was not only capable of detecting the path that starts at the bottom of the screen but also when the path was horizontal. We tested this by going a few meters off trail and pointing it in the direction of the path. The drone was able to see the path even with some trees in the way.

To load a model you can use this Jupyter notebook and do predictions yourselves.